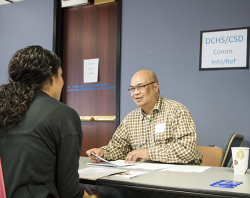 Gary Miguel, right, a Multnomah County Department of County Human Services human resources analyst, speaks with a student at a County to College Mentorship Program job fair meet-and-greet.
College students interested in providing services in Multnomah County learned about internship and mentorship opportunities available to them during a recent orientation and meet-and-greet with county staff.

The 41 students are vying for one of 28 spots in the Multnomah County Office of Diversity and Equity’s College To County Mentorship Program. The program’s goal is to recruit and attract recent graduates and members of underrepresented communities and low-income backgrounds into county ranks.

Options such as the College To County Mentorship Program allow the county to address hiring needs by finding young, talented workers who will represent the county’s future workforce, program coordinator Allyson Spencer said.

“They are our next generation of workers and leaders,” Spencer said at the March 13 event. “We’re going to need great strategies and smart thinkers to address the challenges and opportunities we face now and in the future.”

This summer, the College To County Mentorship Program will place students in departments including the Health Department, Department of Community Justice, District Attorney’s Office, Library and Division of Assessment, Recording and Taxation. Each student is paired with at least one mentor to provide guidance throughout the three-month internship.

Cole Whitehurst, a former intern in the Division of Assessment, Recording and Taxation, spoke to the candidates about the opportunities he had in the program and emphasized showing up on time and taking notes as two ways he found success.

Whitehurst, a 2012 George Fox University graduate, recalled mentioning to a former teacher that worked in the county’s tax division.

“Are you even old enough to do that job?” the teacher asked.

“There is a public perception that it’s an older workforce,” said Whitehurst, who was hired as a full-time property appraiser by the county after three consecutive summer internships in the Division of Assessment, Recording and Taxation. He said he was grateful for the mentorship program and added that participants will grow professionally.

“All of these applicants have the ability and potential,” Whitehurst said. “So, through hard work, they’ll be able to master their craft.”

The recruitment period for this year’s program is closed. Students will learn of their placements by April 18.

For more information about the Office of Diversity and Equity’s College To County Mentorship Program, contact Trisa Kelly at trisa.e.kelly@multco.us.