From 2016-18, we conducted a Feasibility Study for an Earthquake Ready Burnside Bridge. Three stakeholder committees provided input to the study. 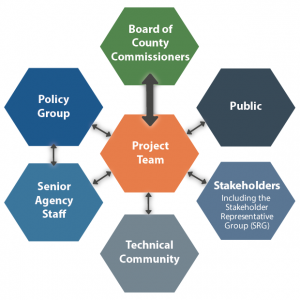 Feedback from the committee’s broad community interest perspective was critical to ensuring the feasibility study identified the alternatives that best serve the community. SRG meetings were open to the public and included a public comment period.

The Policy Group was a committee of agency and elected leaders assembled to review feasibility study findings. Members of the PG represented the following agencies and public representatives:

Members reviewed the feasibility study process and results, provided guidance based on their jurisdiction’s mission and long-term plans as well as identified linkages with other regional plans. PG meetings were open to the public and included a public comment period.

SASG members provided their agency perspective and their individual technical insights in advising the project team in developing a short list of alternatives for consideration in the future NEPA study.  Members represented the following agencies and elected officials: