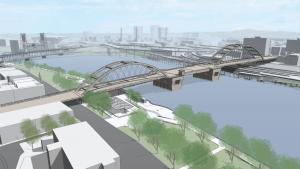 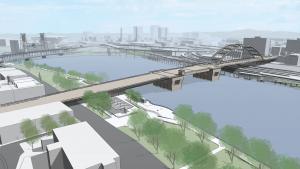 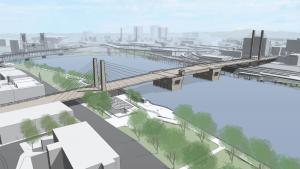 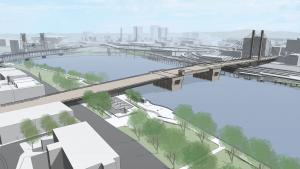 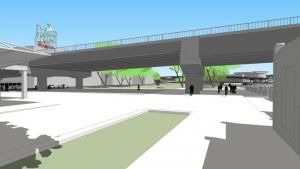 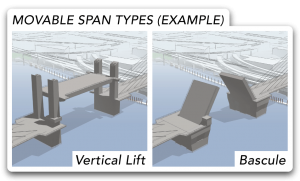 The Replacement Long Span Bridge was recommended as the preferred bridge alternative to move forward into design after it is approved by Multnomah County and the Federal Highway Administration. The alternative will replace the existing Burnside Bridge with a new movable bridge in the same location and length as the existing bridge with support structure above the roadway surface resulting in fewer columns below. This means there are longer spans, or distances, between columns. It was recommended because it is the most seismically resilient with the lowest cost and fewest impacts to natural resources.

Multnomah County and the Earthquake Ready Burnside Bridge project team appreciate the hard work of the Community Task Force and public input on the recommendation of the Replacement Long Span as the project’s Preferred Alternative, the lowest cost of the alternatives studied. However, given the current competition for funding of large infrastructure projects, the elected leaders and management staff at Multnomah County who oversee the EQRB project have asked the project team to consider ways to bring the project cost down. At the same time, the County is working to identify and secure more funds. The aim is to achieve the right balance between the project design and the project cost, ensuring that the project can get built. The County has access to about $300 million for the project from its local vehicle registration fee. The cost range for the Preferred Alternative in the Draft EIS exceeded $800 million.

Finding cost-savings will require changes to the recommended Preferred Alternative that do not reduce the bridge’s ability to withstand a major earthquake. Before making any decisions, we are going to carefully analyze the implications of these potential cost-reduction measures:

The evaluation of proposed cost reductions, development of detailed cost estimates and continued funding work will occur from spring to winter 2021. County leadership will use this information to establish a cost cap (or ‘not to exceed’) number for the project to ensure the project stays at an affordable price. The project team will document these findings along with an updated recommended Preferred Alternative in a Supplemental Draft Environmental Impact Statement in early 2022 for public and agency review and comment.

To learn more about why these changes are being studied now, review the Frequently Asked Questions.

While the Replacement Long Span was identified as the Preferred Alternative, the Draft Environmental Impact Statement studied four alternatives and a no-build (or do nothing) alternative. The other alternatives considered and evaluated include:

1. Enhanced Seismic Retrofit - This alternative would upgrade the existing bridge. While this option allows for the preservation of portions of the historic Burnside Bridge, it requires replacement of some elements, extensive retrofitting of others, and retains many columns in unstable soil near the river. The cost of the retrofit is greater than building a new Long Span bridge.

3. Replacement Northeast Couch Extension - This alternative would be a new movable bridge featuring a new westbound extension of Couch Street over NE 3rd and NE 2nd Avenues that would connect to the bridge over the river. While this option would smooth out the current S-curve on Couch Street, it requires many more columns in unstable soil near the river, increasing seismic risks and making it the most expensive alternative studied. It would also have the greatest impacts to natural resources, businesses, and bicycle access on the east side.

The project team and Community Task Force considered two ways to manage traffic during bridge construction, which is expected to last four to five years starting in 2025.

The recommended Preferred Alternative for managing traffic during construction is to fully close the bridge and detour all vehicles, bikes and pedestrians to neighboring bridges. This alternative was recommended because it reduces construction time and cost and reduces impacts to natural resources and parks. 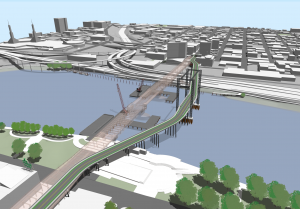 The other alternative considered was to build a temporary movable bridge to maintain some level of traffic over the Willamette River at Burnside Street. The temporary bridge was not recommended because it would add $90 million to the project cost, add another 1.5 to 2 years to the overall construction duration and have additional impacts to natural resources.

Watch a video to learn more about the recommended Preferred Alternative for managing traffic during construction.