He showed up in his best: jeans, sturdy shoes and a plaid shirt complemented by a cotton blazer he picked up at the local food bank. Ty Grove, freshly-shaven and energetic, is ready to submit a job application - the first one he’s submitted in two years.

“It’s really hard to hold down a job when you’re in addiction and homeless,” Grove says.

The 53-year old has been clean for about six months. He moved into his east Portland apartment last month. The last time he rented a home was 10 years ago.

It’s a stark contrast and a long journey from the way things were last summer.

“I was living under the Steel Bridge,” he said. “It was morning and I had heroin and I was getting ready to do it. Two bicycle [Portland Police] officers caught me with a syringe in hand. They started talking to me about whether I wanted to go to LEAD® or go to jail.”

Grove chose LEAD®, or Law Enforcement Assisted Diversion -- a pilot program in Multnomah County now entering its second year. The pre-booking jail diversion program allows police to redirect someone facing low-level drug offenses to case managers or treatment programs and away from jail or prosecution. Participants can choose to connect with a caseworker and advance toward self-identified goals including treatment, employment, mental and physical health needs, and more. The County has contracted with local nonprofit Central City Concern to provide case management and services.

"We can keep putting people on the same path to jail or we can identify some other paths through the criminal justice system such as treatment and mental health care that will prevent people from returning to jail,'' said Deborah Kafoury, Multnomah County Chair. "Jail is clearly needed in some instances. But when we send someone to jail who’s struggling with addiction or mental health issues, we pay for the same result, over and over.''

LEAD® was developed in Seattle in 2011 after the community experienced a stream of low-level drug and prostitution offenders cycling through the criminal justice system. Local leaders created LEAD® to improve public safety and address the criminal behavior of those in the program.

Seven years later, it’s shown promising results. Fifty-eight percent of participants were less likely to be arrested after enrollment in LEAD® compared to those who went through the “system as usual,” according to 2015 study by the University of Washington. 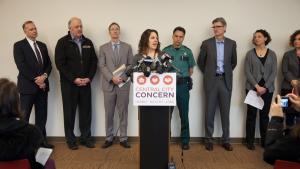 Last February, Multnomah County and its partners launched its own version of the program. Multnomah LEAD®  is one of several strategies identified by local public safety partners as part of the MacArthur Safety and Justice Challenge to reduce unnecessary incarceration and to address racial and ethnic disparities throughout the criminal justice system.

Grove was just 5 years old when his father first introduced him to drugs. “By the time I was eight, I had used just about every drug,” he said.

“What I learned growing up was that happiness was found in using drugs. It wasn’t hobbies or friends or other things that other people find interest in,” he said. “Eventually, it got to the point where I was trying every new thing.”

Addiction fueled crime for Grove, part of a pattern that started when he was just 12 years old.

When officers contacted Grove under the bridge last year, he was 52 years old. He had been in jail or prison countless times and was in and out of treatment.

“I was pretty resistant at first, probably for a couple months. But the caseworker would help talk me down and talk to me,” he said. “He never pushed on me. He would just tell me that I want to help you get your life together.”

That caseworker also reached out to Grove on the streets. If he didn’t show up for an appointment, the caseworker would find Grove and take him to lunch.

“I was a mess,” Grove said. “I was lonely, and he would show up and have a smile on his face and he started to help me. It meant a lot because he wasn’t trying to force a program on me.”

So far, 94 people have been enrolled as of March 2018. Seventy-two of them are active in LEAD®. Many have also resolved outstanding legal issues like warrants and citations.  Fifty-three people identify as white and 41 as people of color.

About 22 people are no longer active in LEAD® for various reasons. Some did not complete the required assessment, others picked up new convictions excluding them from the program. If a LEAD® candidate faces a subsequent arrest or fails to complete an evaluation, a Multnomah County District Attorney, Portland Police officer,  county Mental Health and Addictions worker and Central City Concern caseworkers work together to discuss the client's situation and determine whether he or she can remain in LEAD®.

“It’s a process, one day at a time,” said Karen Kern, senior director of substance use disorder services at Central City Concern. “But the relationship is the most critical component of the program. As we help them with problems identified in other areas of their lives, things start to improve. Through that relationship they’re able to take the next step to treatment.”

Grove is one of 14 LEAD® participants who went from the streets to a roof over his head since the program’s launch.

He was screened through Coordinated Access, a federally required system adopted by the City of Portland and Multnomah County’s Joint Office of Homeless Services. The system assesses people, based on their vulnerability to provide streamlined, tailored and equitable access to shelter and housing.  A LEAD® case manager sat with Grove through the screening process and once completed, referred him to the program’s waitlist.

LEAD® client Ty Grove poses for picture. Grove has been clean for about six months. He moved into his east Portland apartment last month.

Because of his level of vulnerability, Grove scored high on the assessment process and was pulled from the waitlist after a few months. He was placed in a slot available through a HUD McKinney Assistance grant.

His LEAD® case manager went with him for support as he signed a lease for a studio apartment.

“There are support systems,” says Grove. “But you have to learn how to reach out and ask for help. I think it’s the relationship. When they come at you as friend, you sense the goodness.”

Soon, he hopes to add a job to his recent accomplishments. He’s applied for a position with the Clean Start Program, which provides cleaning and maintenance in and around downtown Portland.

“Pretty soon, I’ll be fully self-sufficient not a burden on society,” he says. “I woke up and said ‘it’s time’”