Board of Commissioners proclaims first week of May 2022 as Missing and Murdered Indigenous Women, Girls and Relatives Week of Awareness

As Jillene Joseph logged on to the board meeting, prepping to present, she hesitated in blurring the background of her video. In the background was a blanket. That blanket had been given to Joseph when she was just 11 years old by her grandmother; the same blanket had draped over the casket of her grandfather.

“I have it in my office so I see it every day,” said Joseph, executive director of the Native Wellness Institute. “I have a daily reminder of my responsibility as a Native woman to make my ancestors proud, to do something that helps my people.”

Joseph was amongst the three panelists who are working locally to advocate and support the Native communities and spoke about the importance of bringing awareness to everyone about the missing and murdered Indigenous women.

On Thursday, May 5, the Board of County Commissioners issued a proclamation recognizing May 1-7 as Missing and Murdered Indigenous Women, Girls and Relatives Week of Awareness.  Nicole Buchanan, a senior policy advisor to Chair Deborah Kafoury, presented the proclamation. Buchanan, herself, is a descendant of the Aleut—or Sugpiaq—people, and an enrolled member of the Afognak Native Village. 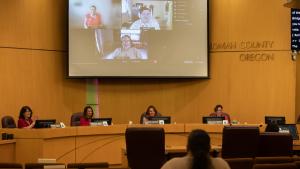 Three panelists who are working locally to advocate and support the Native communities joined the Board of Commissioners on Thursday, May 5, 2022.

“84% of American Indian and Alaska Native women have experienced violence in their lifetime,” said Alix Sanchez, a member of the Little Shell Band of Chippewa and director of Multnomah County’s Domestic and Sexual Violence Coordination Office.

Sanchez noted the legacy of systematic oppression in Native communities has created the conditions for violence to continue and intensify. Raising awareness is one way Sanchez said can help combat the violence in the community, helping carry this work forward.

“Continuing to intentionally engage with Indigenous communities and uplift their work is critical to ending the epidemic of missing and murdered Indigenous people in our community,” said Sanchez.

City of Portland’s Tribal Relations Director Laura John, a descendent of the Blackfeet and Seneca Nations, explained that bringing awareness to the missing and murdered Indigenous women is important, but taking action is just as important and is something she has been working on with the city.

“We are also taking action to avoid being performative in nature,” said John.

Training officers and first responders on how to be culturally responsive and trauma informed and ensuring that officers are giving full credit to tribal court orders is some of the work that John has tackled in her office.

John called attention to the collaboration and partnership needed between communities to raise awareness and take action.

“Multnomah County has been such an amazing partner and we look forward to partnering well into the future,” said John.

Multnomah County’s Domestic and Sexual Violence Coordination Office under the Department of County Human Services has partnered with Native American Youth And Family Center’s (NAYA) Healing Circle. NAYA is a non-profit that serves self-identified Native Americans. The Healing Circle’s purpose is to end the silence around the issues of domestic and sexual violence by providing a space for community strengthening, respect and balance in relationships. The county’s commitment to raising awareness and continuing to fund culturally specific services serves as a way to help move the community forward.

“It is so important that we continue to partner with you and community organizations to continue to raise awareness and find ways to improve our systems and prevent this violence,” said Commissioner Sharon Meieran.

“All of us on this board are committed to carrying those strategies out at the County,” said Commissioner Susheela Jayapal to the three panelists.

Commissioner Jessica Vega Pederson said, “I appreciate the time we have this morning to acknowledge this issue and hear from you.”

Chair Kafoury added her gratitude and thanks, “It’s because of proclamations like this that is raising awareness.”