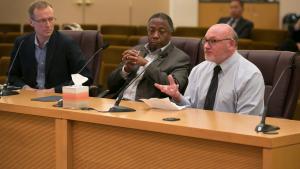 The Board of County Commissioners adopted a resolution Thursday approving a five-year lease at the site of a former motel in Southwest Portland. The County plans to operate a recuperative short-term transitional housing program in partnership with Central City Concern.

The site will allow the Health Department and the Joint Office of Homeless Services to provide wrap-around services to residents who are homeless and who have recently stabilized following a mental health crisis. The 10,000-square-foot facility will include up to 22 single room occupancy units, as well as common areas and outdoor spaces, to help individuals recover in a safe, stable environment.

Located along SW Barbur Boulevard, the program will be accessible by bus and close to services in Multnomah County. It will also include 24/7 support from mental health professionals and people with lived experience. Program staff will help individuals access long-term treatment, permanent supportive housing, and secure income.

Commissioner Sharon Meieran, who represents Southwest Portland , visited the proposed site with staff. She also introduced the project concept to community members during a neighborhood association meeting in January. On Thursday, she praised the project for helping the County address homelessness and mental illness.

“We have always known from the beginning that one of the greatest challenges is housing,” Meieran said. “Health, stability and long term recovery are elusive when you don’t have things like housing. This helps us build a continuum of care in our community, which is so important.”

The program aims to begin accepting referrals within the next several months after facilities improvements are made. Renovations will include wheelchair ramps to make select units accessible for people with disabilities as well as perimeter fencing and other improvements to make the space livable and supportive for residents.

“We know recovery is only possible when people have a stable place to recover,” Multnomah County Chair Deborah Kafoury said. “This is really an exciting opportunity to give folks the stability of a place to call home. I’m hopeful more property owners will step up after seeing the success of this program.”