On the evening of Saturday, Nov. 7, 2020, gunfire erupted at S.E. 33rd Avenue and S.E. Powell Boulevard. Harold Major, age 31, was sitting in his tent when a stray bullet pierced his neck. Another bullet struck him in the upper back. He died before reaching the hospital.

Harold was one of eight people killed in a homicide while experiencing homelessness in 2020, and one of six people killed by guns. That's the highest percentage of people experiencing homelessness killed by homicide in at least three years for which data was published, and it tracks with an overall increase in gun violence in 2020, when shooting incidents reported to Portland Police increased 130%.

Harold Major died Nov. 7, 2020; a year later, his sister Crystal lit candles at the intersection where he died

Harold was a fixture in the neighborhood, where he would pick up trash and try to keep campsites tidy. After three years struggling with substance use and homelessness, he had told his sister, just two days before his death, that he was about ready to get help.

Harold was the second oldest of five kids, in a family that rattled around from Sacramento to Las Vegas to Minneapolis. Harold and his sister, Crystal, were just 11 months apart, and the pair were inseparable, perhaps more so because of the instability and addiction that ran so deep in the family.

The kids finally landed in Happy Valley in their early teens, and spent their remaining school years living with extended family. Their mother was in and out of their lives. Their father was in prison.

Then, at age 19, Harold, his younger brother and two other teens all pleaded guilty to beating up a young man in an abandoned house in Gresham. Harold and his brother were sent to prison.

Crystal, meanwhile, finished school, found a job, had kids, and bought a house and a nice car. But she never lost touch with Harold and their dad. They kept in touch every day. Those relationships, she said, cemented a core tenet of her faith: “People make mistakes, and it’s not our place to judge,” she said.

And when Harold was released from prison she was there to pick him up. He stayed with Crystal’s family for six months, working at a family business and making good money, she recalled. But one day she told Harold she had to work late and couldn’t fetch him from his job.

No problem, he told her. He’d get a ride. He returned to Crystal’s house at 1 a.m. and told her he was going to stay with their mother, who was living in her car at the time.

But the methamphetamines had grabbed him. He would never again sleep in a house. Still, Crystal wasn’t one to break ties. They spoke regularly and met often. He liked to go to Shari's and play slot machines. Other times she would pick him up with no plan in mind. 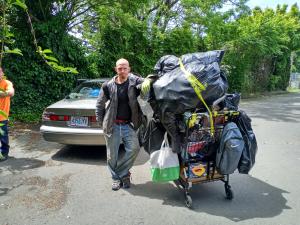 Harold Major pauses for a photo with his belongings.

“He would fall asleep in my car because he knew it was safe,” she said. “And I’d just drive around.”

Harold’s addiction spiraled quickly. He would have hallucinations and call his sister in a panic. Someone was after him, chasing him, trying to kill him, he would say. And Crystal would talk to him until he calmed down, or until she found him and scooped him into her car.

She pleaded with him to quit using meth, to go home with her and get clean. She tried interventions, bribery and tears. But each time he would say, “I’m not ready.”

“I used to say, ‘Why can’t they just stop doing what they’re doing?’” Crystal says today. “But the addiction is so powerful that some people don’t want to do it. That drug is so devious, so destroying, so powerful.”

The last time she spoke to her brother was Nov. 5, 2020, when she brought him groceries and cash and, as she always did, asked him to get in her car and get treatment.

“I’m about ready to be done,” he told her. “I’m almost ready to stop.” He was killed two days later.

It’s been more than a year since Harold’s death, and the shooter still hasn’t been found. Crime Stoppers recently announced a $2,500 reward for information leading to an arrest. Crystal said they may never find out who did it, but she set aside some of Harold's ashes just in case, for his killer.