April 29, 2016
Design drawing of Gladys McCoy Headquarters from the south.

The new-nine story Health Department headquarters will have a brick exterior like its historic Old Town neighbors, but with a lighter shade of brick to communicate an “optimistic” view ahead.

“It will be a very balanced, responsible and not ostentatious building,’’ ZGF Architect Gene Sandoval told the Multnomah County Commission at a briefing on April 21.

The new building, named as its predecessor was for former Multnomah County Chair Gladys McCoy, is meant to bring together scattered Health Department programs and staff. Construction is scheduled to begin before January 2017 and be completed in 2019.

In a regular update to the Board, Sandoval said the building is a very civic-looking building that will function with the sun to avoid glare and heat problems. The ground floor will be active and accessible to the public and welcoming. The design will take advantage of being on the MAX trains approaching from the south and at  the same time, strengthen the presence of the Union Station clock tower.

The team surveyed buildings in the area that have lasted many decades and found what they have in common is a very flexible and open floor plan that could evolve over time so that, “this building could have a lifetime way past off of us in this room,'' Sandoval said.

The Facilities Department, ZGF and the project management firm Shiels Obletz Johnson also reported a positive advice hearing with the city of Portland earlier in April.

“As always, they’re really concerned about the quality of this building and how we can enhance the street, and we had a good discussion,’’ Sandoval said. 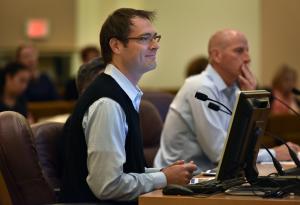 Brett Taute, project manager for the Health Department Headquarters, updates the board on community engagement
Doug Obletz, of the project management team,  told the board the is taking part in several events to share information with construction subcontractors about the Gladys McCoy and the new Multnomah County Central Courthouse, which is scheduled to start in 2017 and be completed in 2020.JE Dunn is the Construction Manager/General Contractor (CM/GC) for the Health building.

The county will take part in a May 5, Oregon Association of Minority Entrepreneurs 2016 Trade Show on May 5 at the Oregon Convention Center.