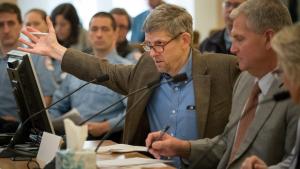 The county seeks to enter an exclusive contract with a single ambulance provider for the next 10 years.

American Medical Response (AMR) has provided the service since 1995. Selection is expected to take place in December 2017 and the new contract would begin Sept. 1., 2018.

Oregon law requires counties to have an ambulance service plan and grants the counties the authority to contract with ambulance providers.

In December 2016, the Multnomah County Board of Commissioners approved a new ambulance service plan that continues the long-standing practice of a single agency providing transportation for 911 emergency responses across the county, all under a single medical director.

However, the updated plan, and this request for proposals, reflect major changes to meet the needs of our expanding and diversifying community and significantly reduce disparities in health outcomes. The contract will include extensive clinical and equity requirements to improve care across demographics and geography, including expectations around workforce development, culturally responsive care and community engagement directly impacting continuous improvement processes.

In developing the request for proposals, County staff has, since late 2015, met with stakeholders, held a public webinar,  several public hearings, and an open comment period.

“Our goal is to build on a medical emergency response system that already works well and make it even  better’’ said Dr. Paul Lewis, Multnomah County Health Officer.

You can read more about the Multnomah County Emergency Medical Services here and find the request for proposal here.