January 22, 2018
Frederico Villalobos at the Porvenir Mini Mart in East Portland models how vendors should check for ID when people purchase nicotine products.

Beginning this week, the Tobacco Control and Prevention team at Multnomah County will employ a new tool in the fight against illegal nicotine sales.

Teens ages 18 and 19 will pair up with county inspectors and head out to shops with a history of selling tobacco to minors and those close to schools. They’ll attempt to buy nicotine products such as cigarettes, cigarillos and e-cigarettes while Multnomah County inspectors stand by to witness any illegal sales.

“We’ll be able to catch them if they’re doing it wrong and hopefully they’ll learn and continue to stay within the law,” one youth inspector, a student at Portland State University, said.

The prevention team began planning the initiative last year, as county officials considered passing an ordinance to raise the legal smoking age to 21. Then the state legislature took up the cause and raised the age statewide. Oregon joins four other states, 17 counties and more than 200 cities across the country in raising the lawful age to purchase tobacco. Any retailer who to sells to a person under 21 in Oregon could face a $500 fine. A second offense could cost a store its tobacco retail license.

The goal is to educate retailers and the community, but also hold repeat offenders accountable. For years, federal surveys showed Multnomah County had one of the highest rates of illegal sales to youth under 18 in the nation.

The youth-inspection teams will begin with a list of 300 licensed tobacco retailers situated within 1,000 feet of a school or those that already have a history of illegal tobacco sales. But youth caught smoking will not face legal trouble.

“Our concern is the retailers who sold to these young adults, that’s a really important one for us,” McFarlan said. “We want all our retailers to do the right thing and comply with the law so that we can protect our kids from these harmful products."

Research suggests that more than one in five 11th graders use a nicotine product, and that rates are highest among youth of color and LGBTQ youth. Under the new law, teens ages 15 to 17 will have the hardest time trying to buy nicotine products because nearly half have been obtaining cigarettes and vape supplies from friends who had turned 18.Nearly 1,700 people ages 18-20 smoke in Multnomah County. The new rules allow smokers 18 and older to still buy nicotine replacement patches and gum. 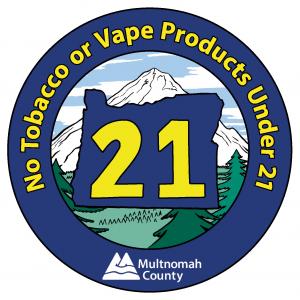 New decal for tobacco vendors, notifying the public that the legal age to purchase is now 21.

Health insurance companies are required to provide people with nicotine replacements such as patches and gum, tools proven to help people stop smoking for good. Young smokers can also download the quitStart phone app, reach out to live phone support or sign up for text support.

A student at Portland Community College, who joins the county’ inspector team this week, said he suspects most smokers 18-to-20 will find ways around the rules. He has friends who are angry about the new law, and they’re looking for stores to sell to them or people 21 and older who can legally buy.

The best outcome he can envision is that stores follow the rules, and keep young people from starting smoking in the first place.
People who have questions about tobacco retail inspections can call Multnomah County Environmental Health Services at 503-988-4163 or email hlth.tobacco.prevention@multco.us

A license is required to sell tobacco and vaping products.

The quit line is open 24 hours a day, seven days a week.

“The Selling of Tobacco in Multnomah County’’ is the first-ever assessment of more than 400 retailers that sell tobacco and nicotine products.

Health Officials recommend County Board take action as e-cigarette use by minors soars and state's illegal cigarette sales to teens leads the nation.

21 is the legal age for buying tobacco products in hundreds of cities, 11 counties, and two states

The county will begin issuing licenses to businesses that sell tobacco and vaping products in July 2016. Enforcement is expected to begin in January 2017.

Beginning July 1, all businesses selling tobacco or nicotine products in Multnomah County must be licensed or face fines or penalties.

Fifty years ago, 42 percent of U.S. adults regularly smoked. The habit had been shown to cause lung cancer in 1950