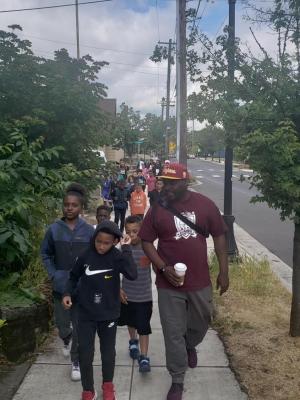 ICB's basketball camp using active transportation during one of their field trips.

The Black community of Multnomah County has been a victim of gentrification over the past several decades. According to an article titled "Displacement in north and northeast Portland – An Historical Overview” published by the Portland Housing Bureau, between 2000-2010 the population of African-Americans living in north and northeast Portland declined by 7,650. Due to this, the Black community has been displaced and pushed further out into East County, thereby losing access to certain resources that were once readily available to them.

Many individuals go about their days completely oblivious to the fact that the infrastructure that exists in a community plays a pivotal role in its livability. A lack of resources such as clearly outlined cross walks, easily accessible public transportation options, and evenly paved roads all play a part in how safe we are in the places we live, work, worship, etc.

Based off of the Oregon Department of Human Services census data, there are 7,022 Black youths between the ages of 10-19 that live in Multnomah County. For their 2018 juvenile crime reporting, Oregon DHS estimates that there were 854 juvenile referrals to Multnomah County for Black youths.

This past summer Inner City Basketball hosted a summer basketball camp for Black youths that ran from June 18th to July 24th. The 30 campers were 2nd to 5th graders and were given instruction from youth staff members who were between the ages of 16 to 24. The camp operated as a typical summer basketball program, however it used sports as a means of informing children on how urban design and active transportation can impact health outcomes.

Each day the campers would spend the early portion of their day working on basketball fundamentals, with the latter part of their day being geared towards academic coursework. During the afternoon they would also frequently go on camp excursions, which included community walks and field trips to locations in different parts of Multnomah County.

Through this model of exposure, Lamar Winston Sr. (Inner City Basketball’s Program Director) hoped to inform children about the urban design disparities that exist in different sections of the county and how they all play a factor in health outcomes. Multnomah County-Youth Violence Prevention team also was able to host a one-day session with the camp staff in order to teach them CPTED (crime prevention through environmental design) principles, which they were then able to use to frame how they instructed the younger campers during their camp excursions.

By collaborating with the Multnomah County-Violence Youth Prevention team on this project, Inner City Basketball was able to show their camp staff the urban design disparities that exist in different sections of Multnomah County and how this puts youth at greater risk for negative health outcomes.

Through the use of active transportation during their camp excursions, they were able to utilize various public transportation methods. In total, the campers were able to travel on five different TriMet (Tri-County Metropolitan Transportation) bus lines and one MAX (Metropolitan Area Express) light rail train.  The Inner City Basketball staff was able to travel with their campers to various sections of Portland metropolitan area, with their travels covering 20 miles in distance.

During these camp outings they made sure to point out the differences in environmental design when traveling to different districts of the county.

Your Involvement Is Key

No child can choose the family they are born into or the neighborhood they grew up in.  As a result they are also unable to have a say in the health disparities that exist in their community that can have long-term effects on their upbringing and health outcomes.

It is our hope that through this summer camp we can provide a platform to increase youth awareness of how urban design plays a factor in the livability of a community. We encourage others to do so with other children as well. By making kids aware of the odds stacked against them, they will be better equipped to face these challenges head on.

The Inner City Basketball camp was a summer program based around education and basketball. They used sports as a means of informing children about disparities that exist in their built environment. Being that they worked with 30 youths who were between the ages of 6-11, it was important for Winston and his team to expose the campers to different ways they could safely utilize active transportation to travel throughout the county. They will now be able to get a first hand account of the different in the built environment and resources that exist in other parts of the county compared to the neighborhoods they live in. By having this perspective it is our hope that they will one day be able to influence policy change that improves the communities for children younger than them that come from similar neighborhoods.

Moving forward, Winston would like to continue the summer basketball program in order to engage with the youth community of Multnomah County. By creating more exposure and increasing outreach efforts for the camp, they will be able to build upon the foundation of learning that they have established this summer.

During this year’s camp, each instructor filled out weekly educational assessments and provided this to parents to inform them about the learning behaviors of their child(ren). Parents will then be able to use these notes to better equip themselves and teachers as they attempt to educate their children.

As a result of teaching the youth staff various CPTED principles, they will now be equipped with the necessary knowledge to inform others on how built environment plays a role in the livability of a community.

By creating this space for Black youth to learn about educational subjects and life, the Inner City Basketball has broadened the horizons of many children in the county.

“I saw a need for our elementary school kids and knew I had the means to address it. I wanted to use basketball as a way to open the kids eyes up and see the bigger picture of how things are set up in the city. If we show them the difference in how things could be, they have no choice but to want more and to succeed,” said Lamar Winston, Inner City Basketball Program Director.