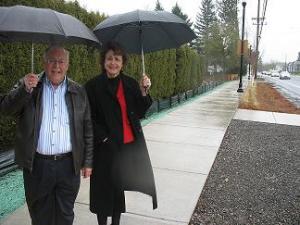 A recent partnership between Multnomah County and the City of Fairview has led to a new sidewalk and pedestrian crossing that improves safety near a busy middle school.

The project paid for a sidewalk along N.E. Halsey Street west and east of N.E. 205th Avenue, across the street from Reynolds Middle School. The project includes one of the county’s first solar-powered pedestrian traffic signals at a redesigned Halsey Street crosswalk. Parts of the project area lacked sidewalks previously. A vegetated rain garden was constructed between the sidewalk and traffic lanes to detain and treat stormwater.

The City of Fairview secured a $150,000 grant from ODOT for the project and contributed another $25,000. Multnomah County secured a $30,000 grant for the pedestrian signal and contributed design and construction engineering services. Funds from a local lighting district paid for historic-style streetlights. The County’s Adam Soplop oversaw construction engineering. The project was constructed by Westech Construction.