Prior to the project, bicyclists and pedestrians crossing the Morrison Bridge shared sidewalks that were only five feet wide with narrower pinch points. It was difficult and uncomfortable to pass other users on the narrow sidewalk. The project has installed permanent improvements to ease access across the south side of the bridge for bicyclists and pedestrians. The goal of the project is to improve safety for all users of the bridge and minimize impacts to traffic flow. 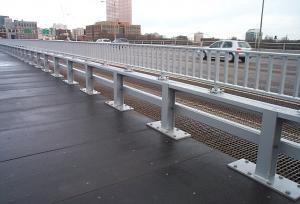 The new guardrail/handrail combination and walking surface on the liftspan portion of the Morrison Bridge.

The 1994 Willamette River Bridges Accessibility Study recommended this project and others for bicyclists and pedestrians. Many community groups participated in the study, which was adopted by the Board of County Commissioners on August 18, 1994. The County Board confirmed the study’s recommendation that permanent improvements should be added when funds became available. The project was included in the County’s Capital Improvement Plan since 1994.

View of old bikepath during Hawthorne project During the closure of the Hawthorne Bridge in 1998-99, a temporary bicycle/pedestrian path was installed across the Morrison Bridge. Before the temporary facility was removed more than 450 residents sent postcards to the County asking that the Morrison Bridge path be preserved. The County made a commitment to work aggressively to make permanent improvements when funding allowed.

The project was awarded in January 2009 to R&R Construction from Wilsonville, OR.

A new path for bicyclists and pedestrians was constructed on the south side of the Morrison Bridge. Work on the path began in late March 2009. The path opened in March 2010. A dedication event for the path was held on Tuesday, March 30th at 12:30 pm beneath the west end of the Morrison Bridge in Waterfront Park. After brief remarks by elected leaders, a drum corps entertained the gathered crowd. The path was dedicated to Gary Tipton and Lynda Pilger, a bicyclist and pedestrian, respectively, who died in separate traffic accidents on the bridge in recent decades. 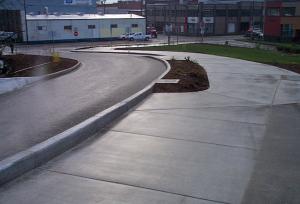 All Morrison Bridge on and off ramps for motor vehicles have reopened. The new two-directional path for bicyclists and pedestrians has opened between SW Naito Parkway and SE Water Avenue. A new eastbound bike lane from SW 2nd Avenue and SW Alder Street connecting to the bridge path has also opened. A new sidewalk on the SW Alder Street ramp leading to the bridge is expected to open in April. The realigned offramp from the bridge to SE Water Ave creates a new intersection at SE Water Avenue between SE Yamhill St. and SE Belmont St. The old offramp required drivers to merge into an offramp from northbound Interstate 5.

The project includes the following elements:

Prior to the project, the Morrison Bridge had the lowest use of the five downtown bridges open to bicyclists.