February 28, 2019
The Multnomah County Board of Commissioners voted Thursday to appoint Patricia Charles-Heathers, Ph.D., director of the Health Department. She will start March 15.

Charles-Heathers holds master’s degrees in psychology and public administration and a doctorate in clinical and organizational psychology. She has managed health agencies for the past decade, including her most recent role leading El Dorado County’s Health and Human Services Agency near Sacramento.

“It is my honor to introduce and welcome Dr. Patricia Charles-Heathers to Multnomah County,” said Chair Deborah Kafoury. “What really impressed me and the interview panel was her commitment to partnership. She is a strategic thinker, and I’m excited to see what Dr. Charles-Heathers is going to accomplish.”

At the Multnomah County Health Department, Charles-Heathers will manage a $335 million budget and more than 1,400 employees.  The department includes a network of clinics that serve nearly 70,000 patients a year — nearly half of whom speak a language other than English. She will supervise a behavioral health system responsible for the mental health care of more than 160,000 Oregon Health Plan members. And she will guide a public health division responsible for the social and environmental wellbeing of some 800,000 County residents — spanning everything from ensuring healthy births to controlling infectious diseases to helping people quit tobacco.

“I see myself being here. Everything I have done in my career has prepared me for this,” Charles-Heathers said before the Board vote. “I have had the opportunity to work in so many different settings, and I’ve grown up in my career. So I can come here, and bring all that I know, and help work with folks to move the agenda.”

Multnomah County announced a national search for a new Health Department director in the fall of 2017. Nearly 100 candidates applied.

“I liked the process; it seemed to be very open and inclusive,” said Marcus Mundy, executive director of the Coalition of Communities of Color. Mundy sat on an interview panel for the five finalists.

“This is a good conclusion,” he said. “It was a hard choice, but a clear decision.”

Charles-Heathers takes over the County’s largest department — with 20 percent of the County’s total $2.1 billion budget — just as County leaders must decide where to make cuts next fiscal year.

“The budget forecast for the next five years is tough and we’re all going to be called on to navigate our departments through some tougher times,” said the County’s Chief Operating Officer, Marissa Madrigal. But Charles-Heathers, Madrigal said, is analytical and methodical, with a calm authenticity that will help guide leaders’ decisions.

“She has this very rooted presence that’s at once peaceful and strong,” Madrigal said. “I’m excited about what that kind of energy will bring to a department that has toiled through so much change and transition.”

That fall, the Health Department sparked a raw and powerful public conversation about institutional racism in government hiring and promotion. During a lengthy hearing employees from across departments shared personal and professional stories of being discriminated against, taunted or belittled because of their race or ethnicity.

Chair Kafoury announced steps to address complaints of systemic racism, outlined the process for a review of County employment practices and human resources structures and launched a national search for the next Health Department director.

Deputy Director Wendy Lear and Integrated Clinical Services Director Vanetta Abdellatif stepped in as interim co-directors and led the organization for the next 16 months.

“They were handed a tough situation, and they guided the Department through a tough year,” Madrigal said. “They had to keep everything going and manage a lot of emotion and trauma. And all that has an impact on morale. But they stepped up.”

But Charles-Heathers will need time to build relationships and establish a track record. “That’s going to be part of her work during the first year,” Abdellatif said, “becoming a known entity.”

Lear said senior Health Department staff will dedicate themselves to easing that transition.

“I want her to know what an amazing team she has behind her, and that we’re all excited to have her,” Lear said. “We have a new building, a new director. We’re turning a corner with fresh eyes. It’s a fresh start for all of us. I couldn’t be happier.”

Charles-Heathers’ leadership team also includes Public Health Director Rachael Banks, who joined Multnomah County in 2002 as a community health worker, went on to work as a health educator, program supervisor, program director and, finally, as director of Public Health. During that time, she’s been part of an internal push to address bias and demonstrate equity for clients and employees.

“Because we’ve done that work, people know what institutional racism looks like, what it feels like. And that has allowed people to call it out,” Banks said. “Patricia is walking into a great organization that’s committed and wants to move forward. She has really good energy — attentive, but calm and stable. And we need that right now.” 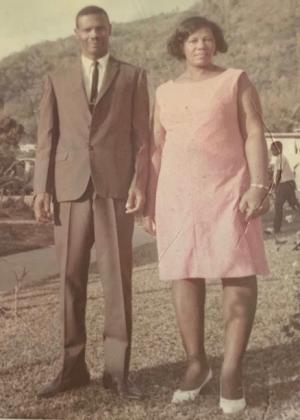 Ruthven Charles and Hadassah Chapman were married for more than 60 years. Five of their six children, including Patricia Charles-Heathers, live in the United States.
“We don’t learn if we don’t fail,” she said. “If we want to move ahead, it’s not about any one of us. When we focus on the greater good, and you get people talking — that’s when you come to some solutions.”

What you see, is what you get

Charles-Heathers’ passion for sitting with people in difficult places and solving problems has always been a part of who she is.

“My sister would say I was born that way,” Charles-Heathers said of her older sister, Daughn. “I’m a good listener.”

Charles-Heathers was born to a middle-class family in Port of Spain, the capital city of the Caribbean island of Trinidad.

Her mother, Hadassah Chapman, was from L’anse Fourmi on the tiny island of Tobago. It was a forest town without running water or electricity — a place where neighbors baked bread in communal clay ovens, and where the goat milk was rich and the coconut water was sweet.

Her father, Ruthven Charles, was born across the island, on the Atlantic Coast. The couple married after meeting on a boat to Trinidad, where Ruthven was attending the police academy.

They settled into a house across from the local public school. Ruthven worked as a police inspector, inspiring his sons to follow him into law enforcement. Hadassah worked as a seamstress, sewing the wedding dress for every woman in their very extended family.

“If I had a choice of the family I could grow up in, I would choose this family,” Charles-Heathers said.

Keith Charles, her older brother, said he looked up to her. She seemed to have it all figured out.

“What you see is what you get,” he said. “She’s comfortable in her skin, and she’s transparent.”

After high school, Charles-Heathers considered becoming a midwife, like her grandmother. Instead, she settled into a clerking job at a bank until she decided what to study. Then she took her first psychology and sociology classes. 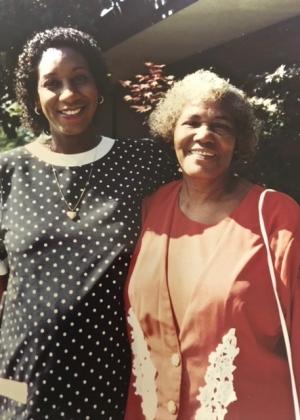 Patricia Charles-Heathers, pregnant with her son Jason, at her doctoral graduation, with her mother Hadassah Chapman.

She left them thinking, “Wow! This is the stuff I want to do.”

“It made so much sense, recognizing that we all go through life and we might have the same experiences but we come out looking at it differently,” she said. “I told my parents, ‘I’m going to get a doctorate.’”

Charles-Heathers earned her bachelor’s degree in psychology at the University of Illinois in Chicago, followed by a master's in substance abuse counseling at Adler University. She earned a doctorate in clinical and organizational psychology from the Professional School of Psychology and later earned a master’s in public administration from National University.

Charles-Heathers moved to Sacramento in 1989. She went on to teach counseling education at California State University. In 2004, she accepted a job as vice president of organizational learning and development at the Lincoln Child Center.

Later, she directed operations for Crestwood Behavioral Health, a network of residential psychiatric treatment centers in California. In 2012, Charles-Heathers started as deputy director of behavioral health for El Dorado County, moving up until she was appointed Health and Human Services director in 2016.

All the while, Charles-Heathers volunteered for nonprofits, including as Board Chair for Chest of Hope, which serves women escaping domestic violence or trafficking. She worked long weekends to refine the nonprofit’s data, branding and mission.

“Since she’s been on our board, we have done a 360,” said Chest of Hope Executive Director Merlyn Pittman. “She listens. She really pays attention. That’s a gift not everyone has. She’s calm, but when it’s time to make a decision, she will execute it.” 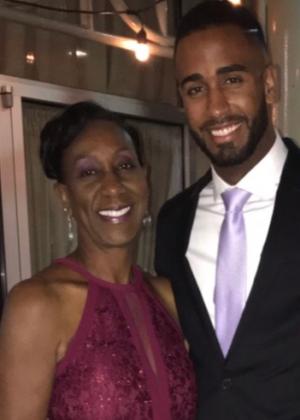 Patricia Charles-Heathers with her son Jason, at a Gala for the nonprofit Chest of Hope.

Last year, as Charles-Heathers’ only son Jason moved away, and after decades in the Sacramento area, she began looking for a new challenge. That’s when she learned about Multnomah County’s national search.

“It’s time. I’m ready. I’m really ready,” she said on the phone recently from her old apartment in Rancho Cordova, as movers packed up around her.

Charles-Heathers’ new home is an apartment near the South Portland waterfront.

She hasn’t visited the Columbia River Gorge, or driven past Kenton’s giant Paul Bunyan, or spotted the Unipiper pedaling through downtown. But she has already connected with a group of West Indian women and scheduled a champagne brunch for April.

And when she visited town last week, she attended the quarterly Say Hey! event welcoming new professionals of color to the region. She was greeted by applause, hugs and a bag filled with Portland goodies — including a rose, dark chocolate and a Tech Town stress ball.

“I’ve met some amazing people. The leadership seems incredible,” she said. “There are amazing opportunities in front of us. We’re just going to need to be clear about our priorities, set our goals and just do it.”

As interim co-director for the Health Department Wendy Lear-- along with Vanetta Abdellatif -- is responsible for managing a $300 million budget and promoting the health of almost 800,000 Oregonians.

The director of Integrated Clinical Services has advocated for electronic patient records, led an expansion of services and has mentored emerging leaders.