Multnomah County is in "Lower Risk" for COVID-19 under the state's reopening framework. Find out more at coronavirus.oregon.gov

This release may be viewed in English, Spanish, Chinese, Vietnamese, Russian, and Somali.

As of 12:30am on Wednesday, May 19, turnout reached 24.23 percent with 136,792 ballots cast, as voters decided more than 100 special district contests and one countywide ballot measure. The specific contests and measures on an individual voter’s ballot depend on which districts and jurisdictions they live in.

Local elections are important and count tremendously in the decision-making that shapes the future of our communities. Thank you to the thousands of voters in Multnomah County who participated and made sure their voices were heard for this special district election. 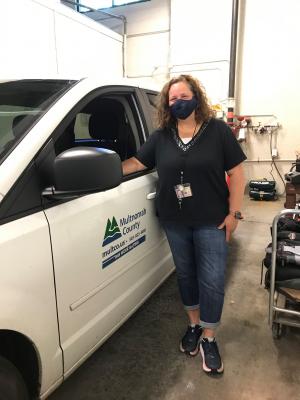 Voters once again signed up and received ballot tracking alerts and updates from Multnomah County’s popular Track Your Ballot service. Text, email, or voice alerts in English, Spanish, Vietnamese, or Chinese allow Multnomah County voters to know when their ballot has been mailed out to them, and then after they vote and return it, when their ballot has been accepted for counting. Almost 30-percent of eligible voters are already signed up for this great service! Sign up before the next election at multnomah.ballottrax.net.

Conducting an Election is a Team Effort

Conducting an election is a team effort, and a dedicated team of election workers is required to assist voters and shepherd ballots from production to mailing, ensuring voters can cast their ballots and ultimately return them to be counted. Each step on the path of the ballot involves election workers. Once again, these election workers continue to serve in the midst of a pandemic.

Lee Neils is a ballot runner. She works as part of a team of two sworn election workers who retrieve ballots from Multnomah County’s 30 Official Ballot Drop Sites and then bring the ballots back to the Multnomah County Duniway-Lovejoy Elections Building to be processed. She has served as an elections worker since 2006. 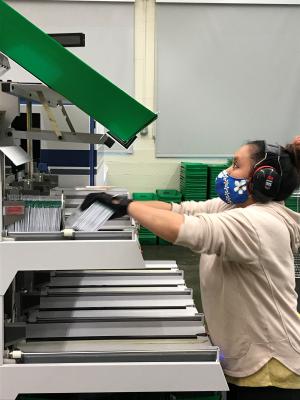 “I love my job. I am participating in the democratic process of voting,” she said. “I like to encounter the people out in the public; answering questions about voting and making them feel appreciated.”

Kristen Mun is working her second election in Multnomah County. She takes the voted ballots received from the Official Ballot Drop Sites or in the mail and runs them through the sorter machine in the Blue Room at the Multnomah County Duniway-Lovejoy Election Building. The sorter machine sorts ballots and captures an image of your signature on the ballot envelope.

“I was curious about how everything worked,” said Mun. “I like this job because first I got to learn more about the journey of the ballot, and second I really like the people who work in Elections. They genuinely care about the election process more than anything.” 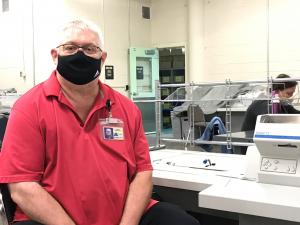 Tom Urbanowicz works with the ballot extraction tables. He checks in trays of sorted ballots and prepares them to be opened. He also does other jobs for Elections. He has mailed ballots to overseas voters, prepares replacement ballots, and picks up the voted ballots that have been returned to the post office each morning. This is his sixth election.

“I taught social studies for 31 years, taught about the voting process and encouraged kids to vote. After I retired from teaching, I started here and I’ve really enjoyed it. I even showed my hair stylist how to vote,” he said. “Her Official Ballot Drop Box was near the salon.” 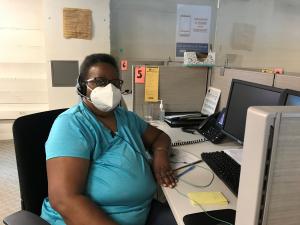 Delores Terry has answered phone calls and assisted voters with information for more than 10 years. When you call our elections hotline at 503-988-VOTE (8683), you’ll probably hear Terry’s encouraging voice on the other end.

“I enjoy talking to the voters, and assisting them. I’ve learned an awful lot about the elections process myself, and it’s nice to be able to share that with the people who call,” said Terry. 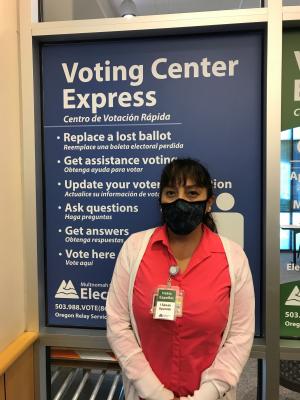 Susy Kristin works at the Gresham Voting Center Express in the Multnomah County East Building at 600 NE 8th Street in downtown Gresham. She is also part of the Voter Education and Outreach team. She started as an elections worker in 2016. Susy helps voters who speak Spanish to understand the importance of elections through interpretation, voter assistance, voter education, and outreach.

“Once I started working here I really felt it was important to help people understand how elections work and how to vote.  I like to serve the Latino community.” Kristin shared.

The Elections Division employs up to 300 on-call election workers to join permanent staff to conduct every election.  Each election worker serves as part of the bigger purpose of conducting accurate, accessible, and secure elections for Multnomah County voters.

Final official election results will be certified and submitted to special districts by June 7, 2021. At least 50 to 60 percent of the total ballots cast in an election are reported by 8 p.m. on Election Night in Multnomah County. Ballot processing will continue today, with results regularly updated at mcelections.org.

The next scheduled election in Multnomah County is the May 17, 2022 Primary Election.