After years of declining HIV infections in Multnomah County, state and local public health officials are responding to an increase in new cases, especially among people who use methamphetamines or inject drugs.

In the last 18 months, 42 new cases of HIV among people who report drug use as a risk have been identified in Multnomah County. Nearly half of the newly diagnosed cases had tested negative for HIV test in the past two years, suggesting these are new infections. By contrast, only 25 cases reported in 2016 and 2017 combined had injection drug use as a risk factor for HIV infection.

The recent cases are from all parts of Multnomah County and include women and men, both heterosexual and men who have sex with men. The most common risk factor so far is drug use: using methamphetamine in any form or injecting any type of drug.

Hamilton County, Ohio and the Northern Kentucky Health Department are investing a five-county cluster of new infections among people who inject drugs. And the CDC this year reported on a rise in cases in Northern Massachusetts.

Multnomah County Health Department urges people who may have been exposed through sharing needles or sex with high-risk partners to get an HIV test. Multnomah County Health Department will connect anyone who tests positive for HIV to effective treatment and other support services. Outreach staff also help find and test others who may have been exposed to HIV. Someone at risk who tests negative can get medicine to protect them from HIV infection.

“We don’t know yet if this is a short-term increase or longer-term trend,” said Dr. Jennifer Vines, Multnomah County Deputy Health Officer, “the hope is that more testing will link people to the care they need and stop the spread to others.” 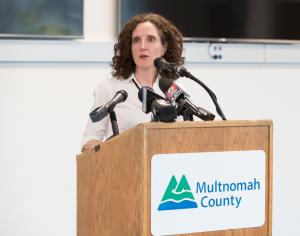 Other infections increasing along with HIV

The same factors that put people at risk for getting HIV are also contributing to a local increase in syphilis, and raising concern that our County could be vulnerable to a Hepatitis A outbreak. Many of the individuals newly found to have HIV are experiencing homelessness or have reported unstable housing, which plays a major role in people’s ability to get preventive care and prioritize their health.

Syphilis, a sexually transmitted disease, continues its sharp increase in Multnomah County that first began a decade ago. Locally, infections have remained primarily among men who have sex with men, but female cases went from 52 in 2017 to 87 in 2018 and continue to increase in 2019. In addition to HIV screening, county public health officials are recommending syphilis testing among men and women who use drugs, and men who have sex with men. Syphilis is cured with antibiotics.

Multnomah County is also seeing an increase in cases of Shigella, a bacterial diarrheal disease that can spread easily through intimate contact including oral and anal sexual activity as well as among people without access to regular hygiene, as it did in a Portland-area outbreak in 2015-16. Until recently, Multnomah County typically received about 20 Shigella case reports per year, compared to 95 locally acquired infections in 2018. Most people recover without any treatment. For those who are severely ill with Shigella, treatment can be difficult because the majority of local Shigella strains are resistant to at least one common antibiotic, and many local strains are resistant to several first-choice antibiotics.

Although there has been no increase in cases of Hepatitis A, outbreaks in cities and counties across the country among people using drugs, men who have sex with men, and those living homeless, have increased awareness of the importance of vaccination. Hepatitis A vaccine is very effective and is part of the routine childhood vaccination schedule. Multnomah County Health Department is asking that local healthcare providers take every opportunity to give Hepatitis A-containing vaccine to non-immune adults, including people who use drugs, men who have sex with men, people living homeless, and any unvaccinated adult who wants protection.

Who should get tested for HIV?

Where to get tested 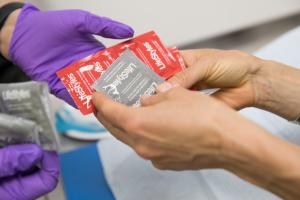 Many nonprofit and public clinics provide HIV and STD testing, regardless of an individual’s ability to pay, including:

People at risk for HIV can also get HIV PrEP, a medication that protects someone from becoming infected with HIV, at the Multnomah County STD Clinic.

Officials encourage anyone who uses methamphetamine or injection drugs to get tested for HIV, STDs

Everyone has an HIV status. Get to know yours.

Risks for HIV overlap with syphilis, drug-resistant Shigella, and Hepatitis A

Get checked and treated for sexually transmitted diseases, including an HIV test. Nonjudgmental and confidential.