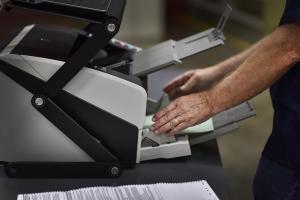 “This technology will significantly reduce the amount of pre-processing of ballots required before tabulation. In the past, a small army of election workers would have to inspect every ballot for over votes, ambiguous marks and write-ins before scanning because the old system didn’t handle those situations well. The new system is much smarter. It takes a picture of the ballot vote area, highlights areas on the ballot image where there might be problems and allows election workers to resolve those issues on the image rather than enhancing the physical ballot,” said director of Elections Tim Scott.

ClearVote technology will expedite ballot tabulation by scanning 4,000 ballots per hour compared to the current 1,000 ballots per hour.  The system will also improve transparency by allowing all election stakeholders to clearly see the voters’ marks, giving candidates and their supporters convincing evidence of the outcome of an election.

Boston, Massachusetts based Clear Ballot manufacturers ClearVote technology.  While Oregon is the first state to certify ClearVote for use as a ballot tabulation system Clear Ballot has significant experience auditing election results in several states. ClearVote will also be used in Josephine County.